In this Creamy Miso Squash Soup with Seared Brussels Sprouts and Apple, I went all in for seasonality, combining a trifecta of fall-harvested produce: squash, Brussels sprouts, and apple. This dish comes together quite quickly because you can prepare all the toppings while the soup simmers. 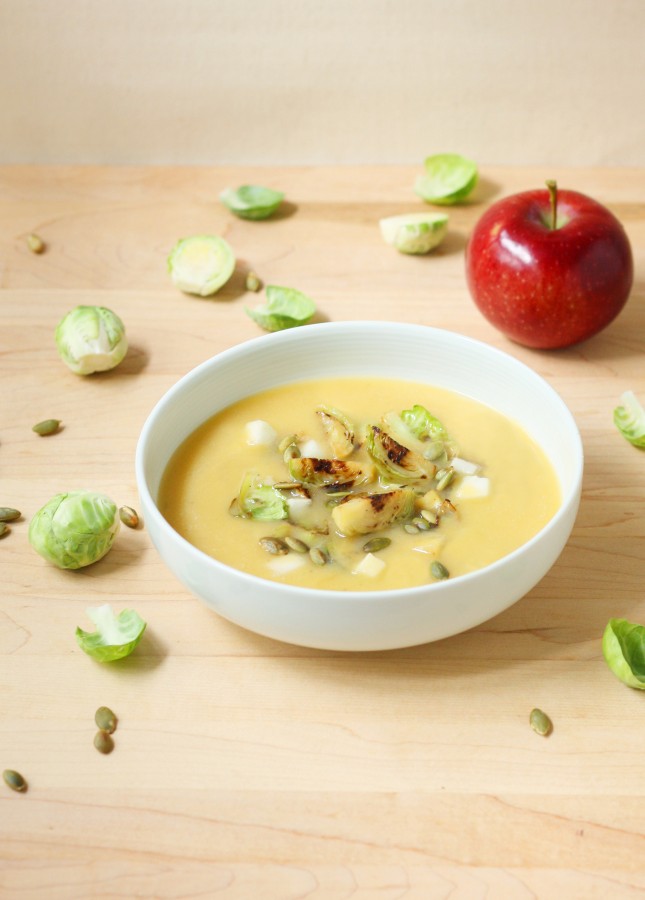 What makes creamy soups served in fine dining restaurants so delicious? The garnishes! Of course, the flavors incorporated into the liquid component of the dish are important, but textures bring a humble bowl of soup to the next level. Choosing toppings of various textures—meaty, crunchy, chewy, soft—and flavors that complement the soup’s main ingredients make the dish not only more interesting but also more filling.

I used to go to a duck-focused restaurant in Quebec City just to enjoy the soup that came with the lunch. It was heavenly and velvety, and it came sprinkled with an addictive assemblage of toppings. Crunchy croutons rendered in duck fat, tiny bits of smoky duck breast, glistening drops of house-made herb oils, perfectly diced fresh fruit—I never got the same toppings twice. The bland set-menu soup I didn’t think twice about in other restaurants was suddenly setting the stage for an amazing meal by being amazing in and of itself.

Unfortunately, that restaurant is gone, so I have adopted the creative topping habit at home. Of course, when you’re pressed for time, a simple ladleful of soup will do, but any creamy soup can blossom into a dish worthy of serving to company if you carefully choose what you sprinkle over it. There are some basic principles to follow: The soup should be on the thick side so the toppings don’t sink to the bottom easily. The toppings should be small or tiny so they distribute throughout the soup, keeping mouthfuls manageable. The textures and flavors should always complement the main produce used in the soup (in other words, don’t just add bacon bits because, you know, bacon.)

In this soup, I went all in for seasonality, combining a trifecta of fall-harvested produce: squash, Brussels sprouts, and apple. This dish comes together quite quickly because you can prepare all the toppings while the soup simmers. You can also make everything in advance and assemble the dish right before serving it.

Curious about the use of miso? It adds depth and complexity to a soup that doesn’t rely on the richness of dairy products. If you don’t have miso on hand, you can omit it, but if you do, by all means give it a try. It’s very subtle, but it adds an addictive, somewhat meaty dimension, as umami ingredients do.

In this Creamy Miso Squash Soup with Seared Brussels Sprouts and Apple, I went all in for seasonality, combining a trifecta of fall-harvested produce: squash, Brussels sprouts, and apple.
Servings 4 servings
Author marie asselin (foodnouveau.com)