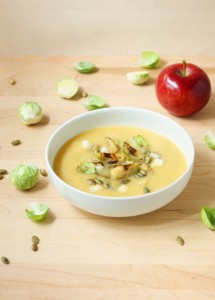 In this Creamy Miso Squash Soup with Seared Brussels Sprouts and Apple, I went all in for seasonality, combining a trifecta of fall-harvested produce: squash, Brussels sprouts, and apple.

In a pot set over medium-low heat, heat 1 tbsp (15 ml) extra-virgin olive oil, then add the shallot and fry gently until translucent but not brown, about 3 minutes. Add the ginger and cook just until fragrant, about 1 minute. Add the squash and apple cubes and the vegetable broth and bring to a simmer. Cover and keep at a low simmer until the squash is very tender, about 20 minutes.

While the soup simmers, heat 1 tbsp (15 ml) extra-virgin olive oil in a skillet over medium-high heat until shimmering. Add the quartered Brussels sprouts and let them sear on one cut side without moving for about 2 minutes (peek under the sprouts from time to time to make sure they’re not burning). Shake the sprouts around so the other cut side gets to the heat (you can get fussy about it and turn them one by one if you want to make sure they’re all evenly seared, but I usually just shake the pan). Keep on cooking for 2 minutes, always watching over the sprouts so they don’t burn, lowering the heat if needed. Add 1/4 cup (60 ml) water, cover and steam for 2 minutes. Remove the cover and let the water evaporate. Season with salt and pepper, transfer to a bowl and reserve.

Dice the second half of the apple in very small cubes (1/4-in (0.5-cm) dice look great). Drizzle a bit of lemon juice over the cubes to prevent them from browning.

Once the squash is very soft, remove the soup from the heat. Dissolve the miso paste in a ladleful of broth before returning the mixture to the pot. Puree the soup in a blender until super smooth. Taste and season with salt and pepper as needed. Recipe by Food Nouveau at https://foodnouveau.com/recipes/soups/miso-squash-soup-with-brussels-sprouts-apple-dairy-free-vegan/